Non-stick cookware was all the rage for many years, but due to concerns about safety, certain chemicals were phased out. Are the new chemicals really safer? We’re going to take a look at the research on the safety of non-stick cookware as well as examine a few other types and provide specific recommendations for safer cookware. 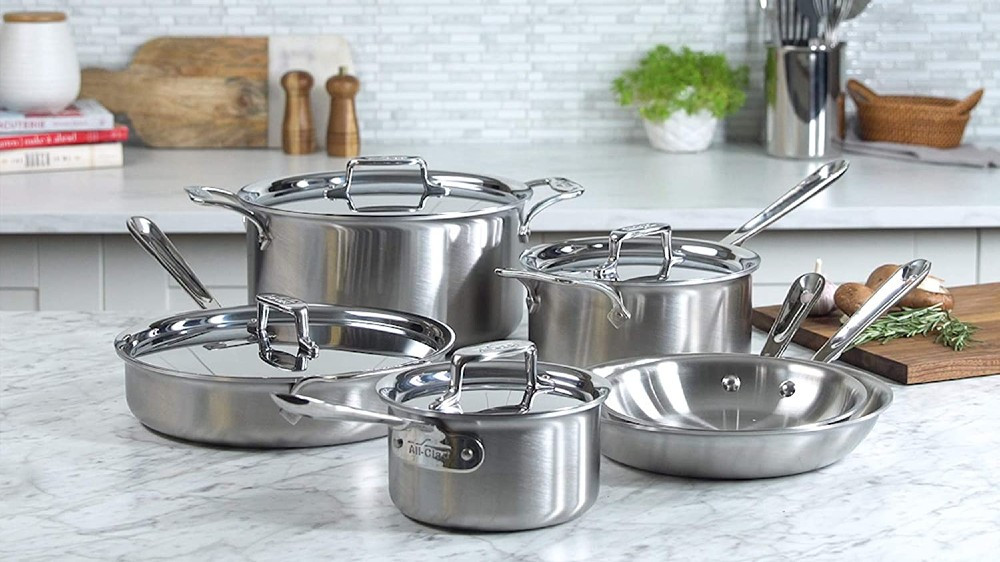 “Nothing sticks to Happy Pan!” That was Teflon’s first slogan for their new, non-stick pan in 1961. The idea was simple: no mess, easy cleanup, plus you could cook without oil or butter. It’s the health-conscious consumer’s dream, right?

We usually consider pots and pans the vessel for preparing our food, but actually, cookware contributes to our health and nutrition and can even cause us to unknowingly ingest unwanted chemicals and metals. Several of the chemicals used to create non-stick surfaces have serious health consequences on both humans and animals.

I know I know, that sounds terrifying, but I’m going to break down it for you and give recommendations on safe cookware so you can choose the one that best fits you and your family’s needs.

So, let’s start with a little science lesson. Bear with me here. It gets good. 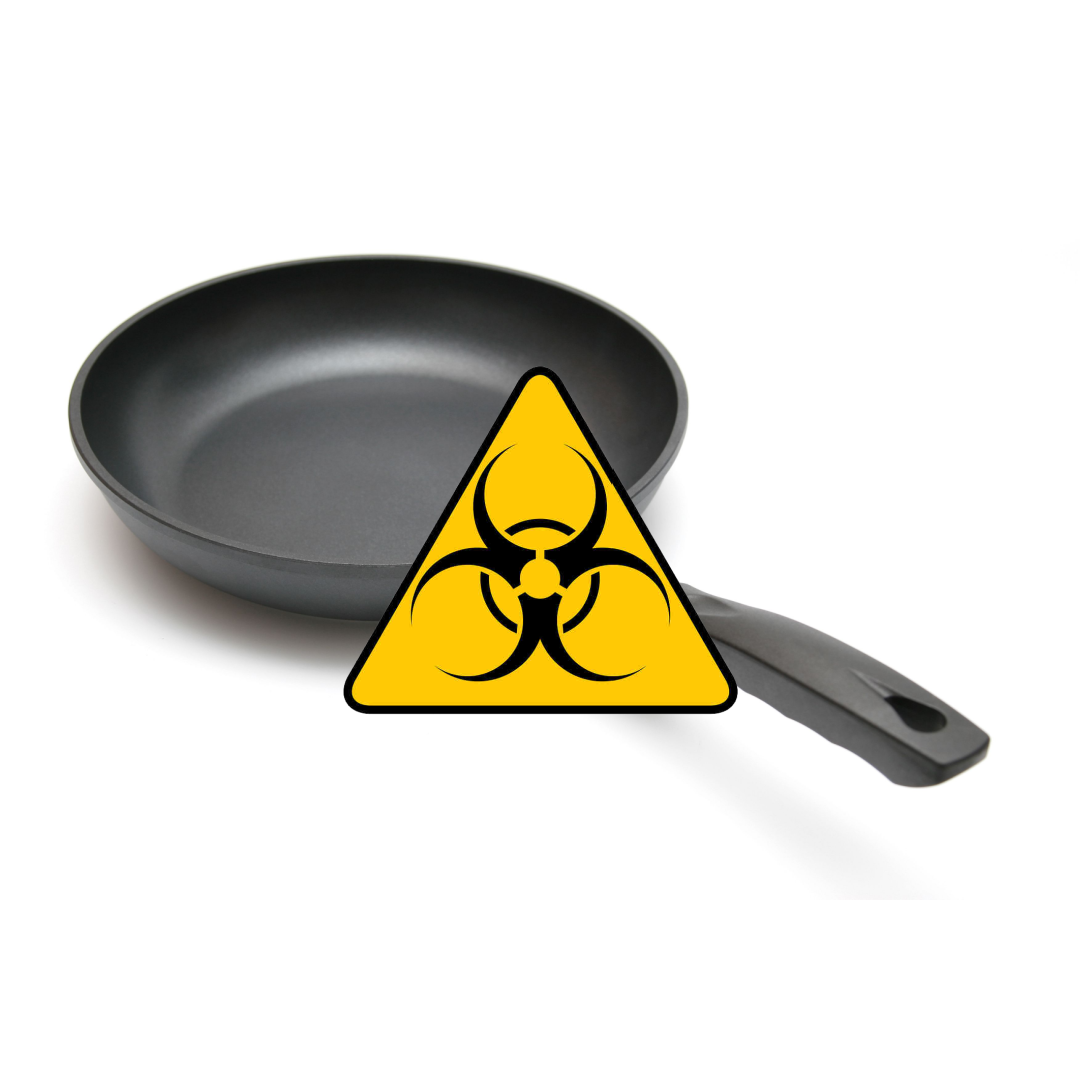 With that being said, not all cookware that is marketed as having a non-stick surface is PTFE based. For example, ceramic and cast iron cookware often have non-stick properties but are not PTFE-based. We will explore these alternatives after digging into the research on PTFE-based non-stick cookware.

These chemicals don’t break down easily, so they accumulate over time both in the environment and the body. They are also released into the air, soil, and water during production and can be found in many places including contaminated food, packaging, household products, and drinking water.

Dangers of Exposure to PFOA and PFOS 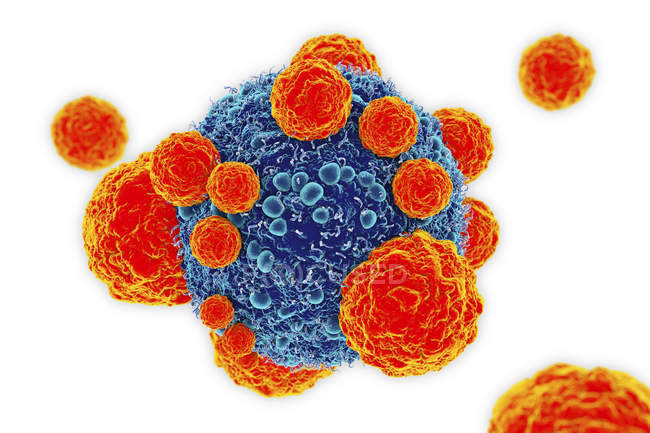 Many studies show that PFOA and PFOS can cause reproductive and developmental harm, liver and kidney damage, tumors, and immunological effects in lab animals. But we know that animal studies don’t always translate to humans.

So, what about in people?

Since scientists obviously wouldn’t intentionally expose people to harmful chemicals, human studies have examined people who have been exposed to PFOA either at work in chemical plants or who live nearby where it contaminated the environment.

In a study of over 32,000 residents who either worked at a local chemical plant in Ohio or who were living near a contaminated water district, higher PFOA blood serum concentrations were associated with kidney and testicular cancers. Unfortunately, the effects of more fatal cancers were unable to be determined because the study only looked at survivors.

Even more studies in humans have shown that PFOA exposure may increase cholesterol levels, cause low infant birth weight, have effects on the immune system, and cause cancer.

All this evidence prompted the International Agency for Research on Cancer (part of the World Health Organization) to classify PFOA as “possibly carcinogenic to humans”.

Furthermore, blood levels of PFOA and PFOS were associated with longer time to get pregnant and higher odds of infertility in a study of 1,240 women.

In 2006, the EPA convinced 8 major chemical manufacturers (including Teflon) to eliminate PFOA and PFOS by 2015, but Teflon completed the transition by 2013. Now non-stick cookware made in the U.S. proudly touts that it is PFOA and PFOS-free.

Even though PFOA and PFOS are no longer manufactured in non-stick cookware in the U.S., imported products may still contain them.

Perhaps more concerning, they were replaced with PFBS and GenX chemicals which have been shown to have similar health effects in animals as the chemicals that were phased out.

Research on the effects of these specific chemicals on humans is still limited because they have not been used long enough to evaluate the long-term health effects on people who have been exposed, but animal studies are NOT promising.

The EPA is currently assessing the toxicity of PFBS and GenX because they been shown to have negative effects on the thyroid, kidneys, reproductive organs and tissues, and the developing fetus in animals. While the data on cancer related to PFBS is still inadequate, the EPA stated that the data on GenX chemicals are suggestive of cancer.

Sound familiar? Two toxic chemicals have been replaced with a slew of new ones! 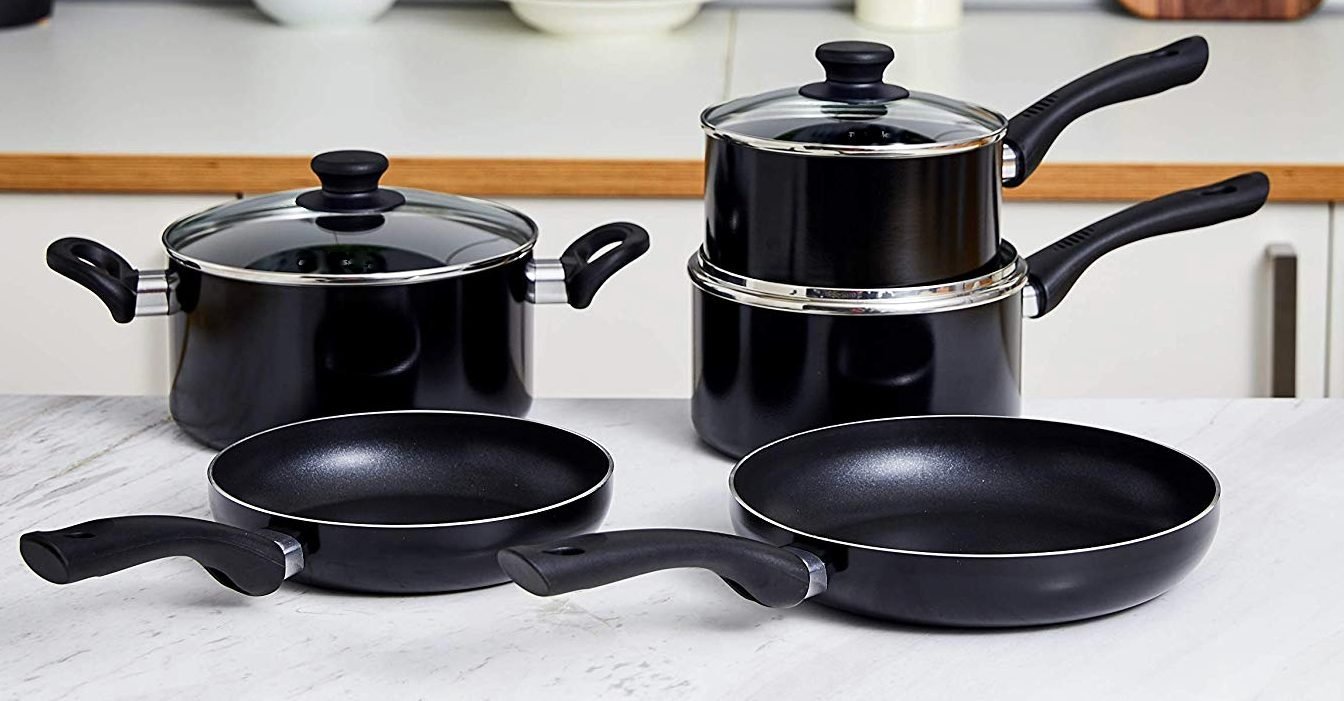 Okay, so we know that these chemicals are bad for humans and animals when they are exposed in high amounts, but what does that mean for using non-stick cookware?

Is it really THAT bad?

PTFE has been shown to emit toxic fumes when heated to very high temperatures and has caused polymer fume fever (which causes flu-like symptoms and occasionally death) in both exposed workers and individuals using non-stick cookware. This is why the general advice is that non-stick ware is considered safe as long as it’s not heated to very high temperatures. However, some studies suggest otherwise.

Unfortunately, these fumes are produced at temperatures that are well within normal cooking ranges. The surface temperature of non-stick pans after heating for 8 mins on a conventional stove is 750° F which is higher than the temperature at which PTFE resin has caused fume fever in exposed workers. Furthermore, at temperatures greater than 752° F, PTFE starts to break down and produce other toxic chemicals that have been shown to cause respiratory problems in Teflon workers.

Let me say that another way because this is key…

People have experienced serious illness when exposed to fumes produced by PTFE that were heated to temperatures comparable to or LESS THAN normal cooking temperatures.

In addition, PTFE fumes can be harmful and even fatal in exposed animals. One study showed that lethal fumes were produced when chickens were housed under PTFE-coated light bulbs that were heated to only 395° F, killing more than half of the birds within 72 hours. Now compare that to the fact that 350° F is a common baking temperature, and 500° F is the searing temperature for meat in the oven or grill.

Unfortunately, most of the research on the negative impacts of PTFE fumes (including the studies cited above) has examined the previous version of PTFE containing PFOA and PFOS instead of the newer composition containing PFBS and GenX chemicals because it’s still so new. Because the research is lacking in this area, we do not know how the fumes of the newer non-stick cookware will affect the health of humans and animals.

Unfortunately, we still don’t know what the health consequences are for using the newer version of non-stick cookware. Two toxic chemicals were replaced with new potentially dangerous ones, and the other chemicals used to make the non-stick coatings have not changed.

Based on the findings of research examining the previous version of non-stick coatings and the limited research on the newer chemicals, I choose not to use non-stick cookware.

Thankfully, there are several safer options if you decide to ditch the non-stick too. 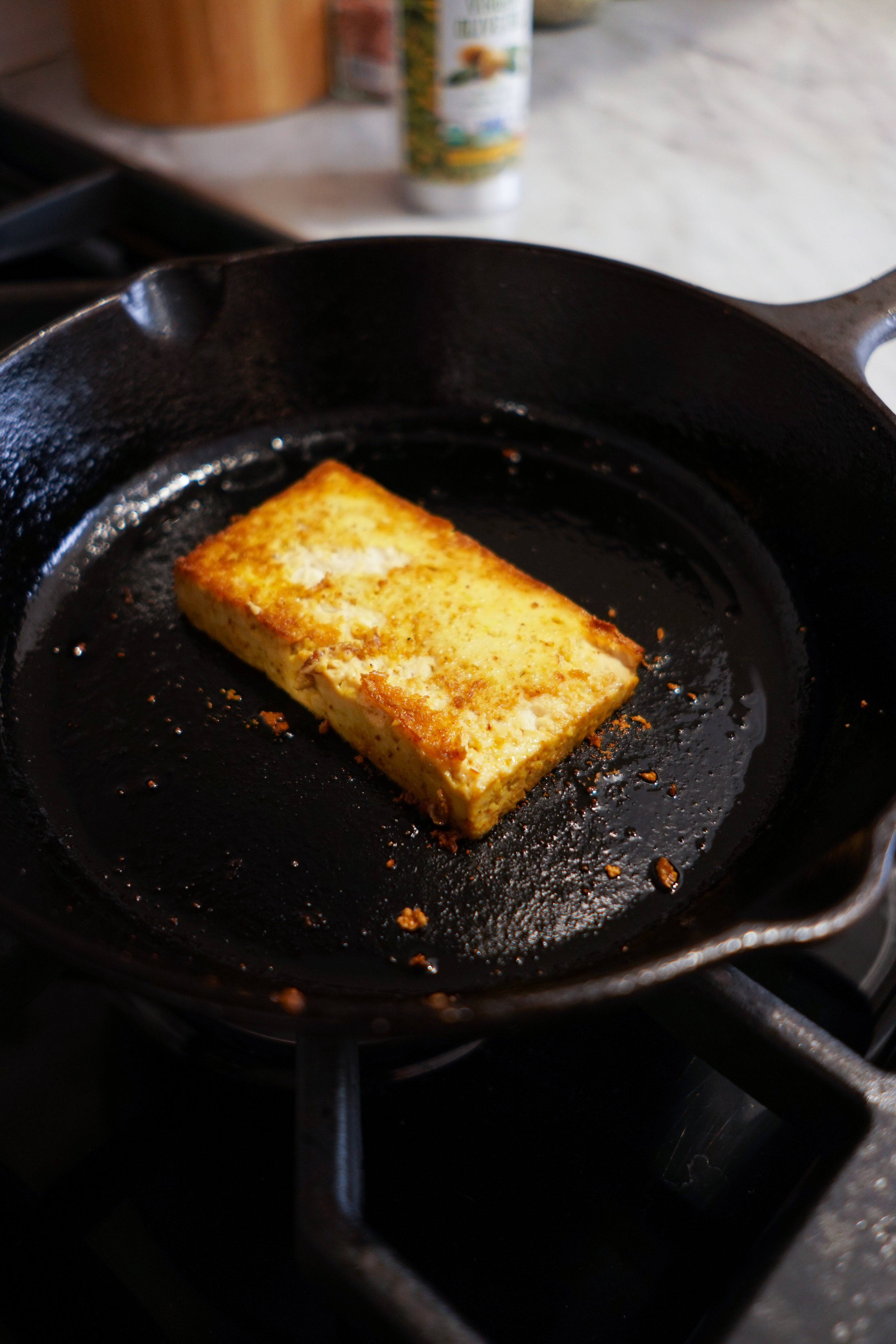 This retro cookware is coming back into style because of its durability, safety, naturally non-stick surface (look for pre-seasoned skillets), and potential health benefits.

Cooking in cast iron can increase the iron content of food, especially when cooked for longer times and when acidic ingredients are used. One study found that cooking spaghetti sauce in a cast-iron skillet increased the iron content by five times!

This may be beneficial for plant-based, menstruating and anemic individuals, or any else looking to increase the amount of iron in their diet. However, as with all minerals, iron toxicity is possible, so cast iron may not be the best option for individuals for whom this may be a major concern, such as those with hemochromatosis (when the body stores too much iron).

Here are a couple of my favorite cast iron cookware pieces: 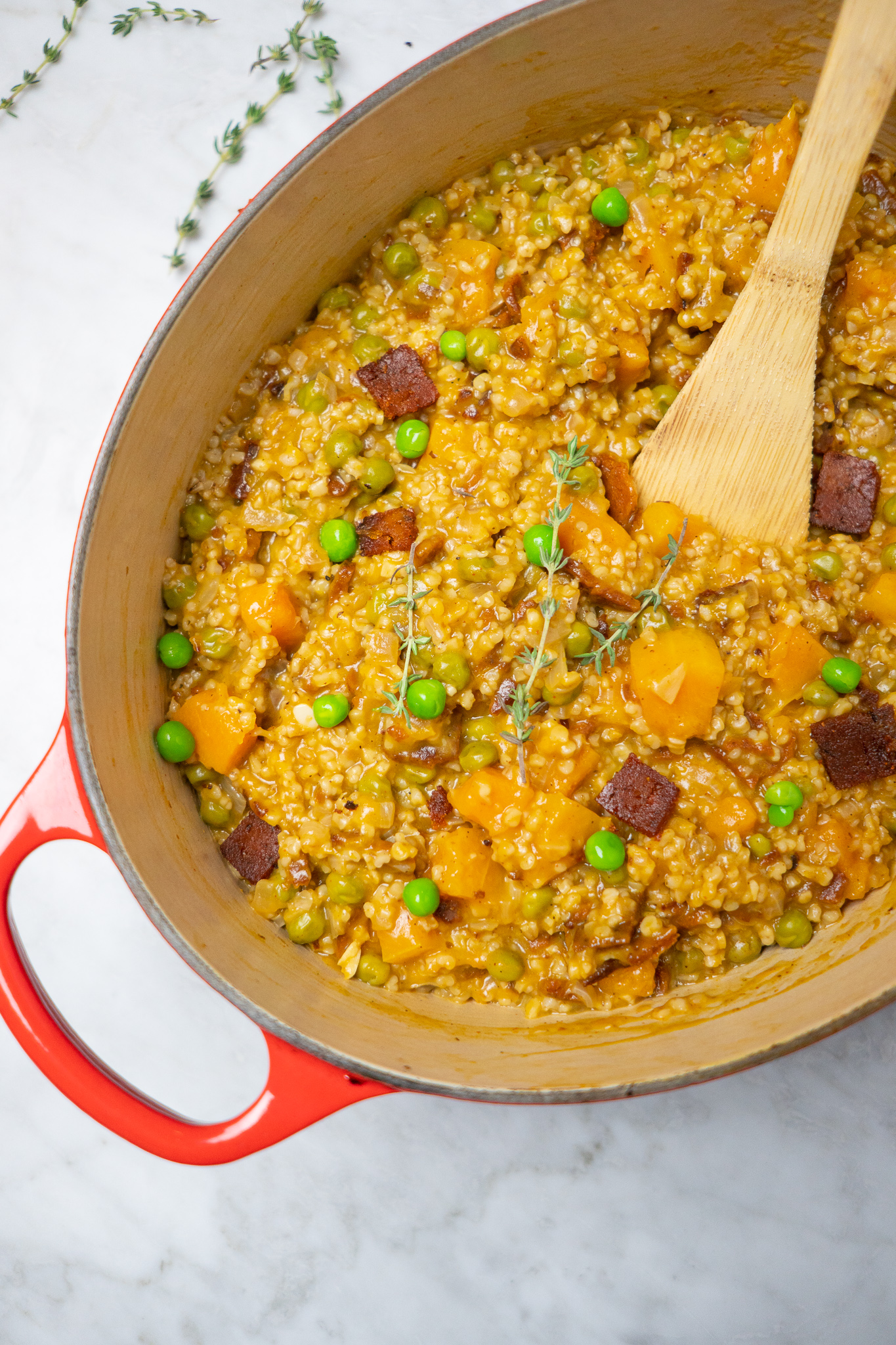 There are two types of ceramic cookware: ceramic non-stick coating and ceramicware. Ceramic non-stick pots and pans are made by coating metal cookware with a silicon layer that is naturally non-stick. Real ceramicware is made from is clay that has been fire-hardened and glazed.

Neither ceramic nor the coating contains the chemicals used in non-stick cookware. However, the glass-like coating of some ceramics may contain lead and cadmium which can leach out into food if it not coated properly, especially if cooking acidic or very hot foods.

The FDA has laws for restricting the amount of lead and cadmium that can be present in ceramic cookware and recommends buying from known manufacturers and avoiding red, yellow, and orange glazed ceramic cookware.

If you are concerned about the lead in your ceramic cookware, you can easily use an at-home testing kit.

Large manufacturers of lead-free ceramicware include: 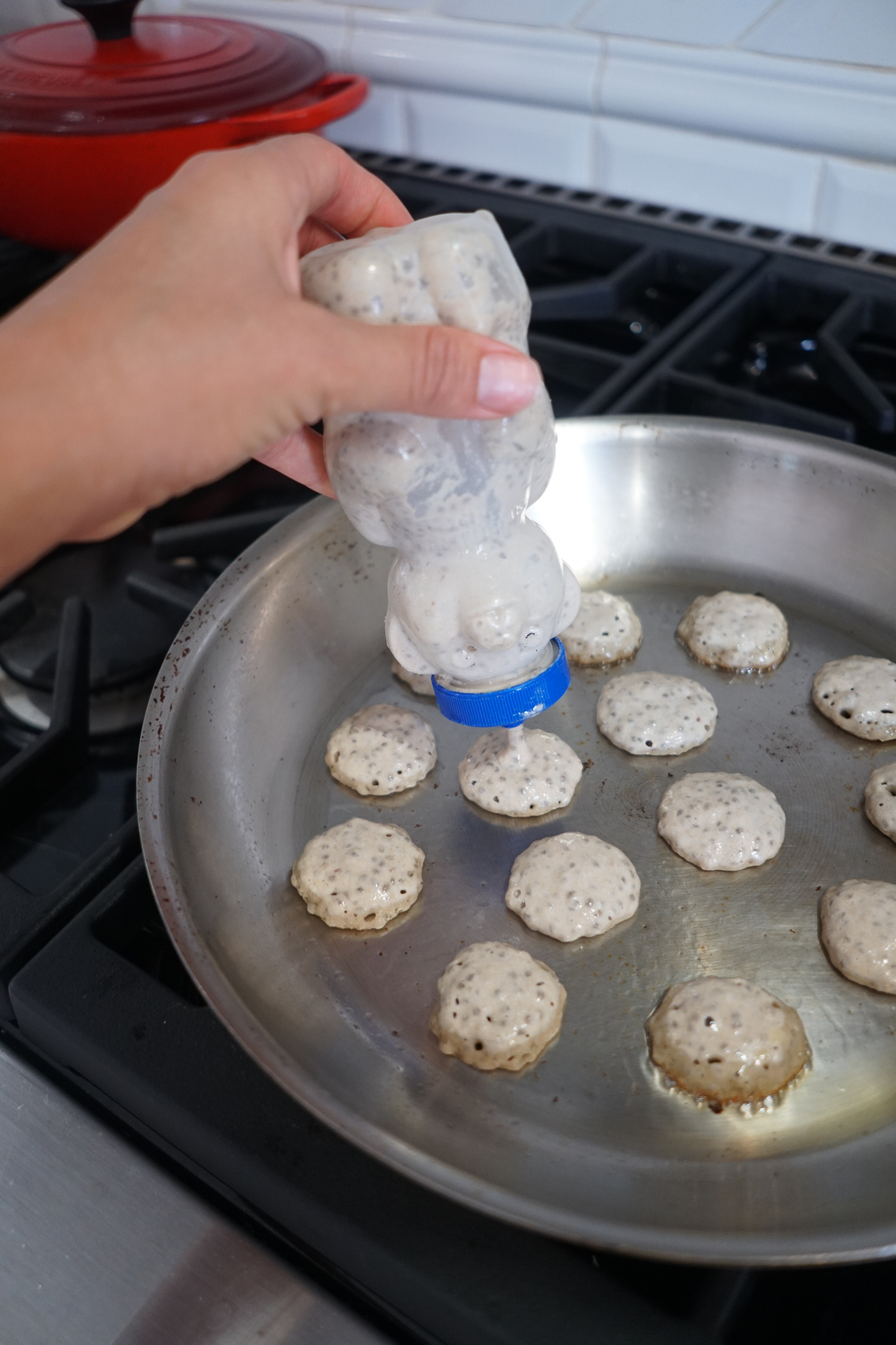 Stainless steel is the most ubiquitous of the cookware because it’s durable, versatile, and affordable. While it does not contain any of the Teflon chemicals, it is made with different types of metal, and there are some concerns with nickel and chromium leaching into food during the first few cooking cycles. This is dependent on many factors including the grade of stainless steel, cooking, method of cleaning, and previous usage and seasoning.

One study found that by the 10th cooking cycle, the amount of metals released were well within the daily upper limit amounts for human consumption. Ultimately, researchers concluded that those with nickel or chromium sensitivities may want to avoid cooking with stainless steel.

But it appears that stainless steel cookware does not pose a danger for most healthy individuals. If you want to limit the leaching of nickel and cadmium into food, opt for handwashing instead of dishwashing and choose higher-grade stainless steel. 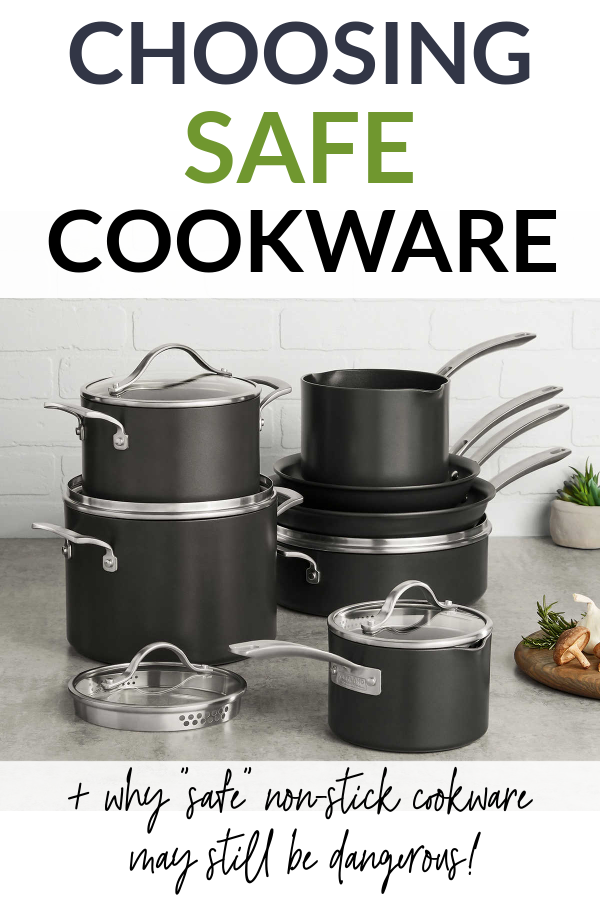 Kaytee is a health coach, personal trainer, and fitness nutrition coach who helps individuals optimize their health so they can live their best life. Kaytee’s years of struggling to heal herself from mental and physical health diagnoses fueled her passion to help others find healing and health without the confusion and frustration that she experienced. Her unique approach focuses on six key lifestyle pillars for optimizing wellness: whole-food nutrition, functional fitness, optimized sleep, reduced toxic load, daily mindfulness, and supportive community. She is a Certified Personal Trainer and Fitness Nutrition Coach and has a BA in Psychology and a minor in Kinesiology with an emphasis on health and wellness. She is currently studying at USC for her Masters of Science in Nutrition, Healthspan, and Longevity and is working toward becoming a Registered Dietitian and Institute of Functional Medicine Certified Practitioner.

Kaytee is hosting a free Wellness Workshop on Sunday, November 15th that will give you an overview of how to optimize each of your six lifestyle pillars so you can start living your best life. As a thank you for joining, she’s also offering a free gift to everyone who joins! You can sign for her workshop here, and you can learn more about Kaytee at kayteehadley.com and connect with her on IG @kayteehadley.

IF YOU’RE INSPIRED BY THIS POST MAKE SURE TO SNAP A PIC
AND TAG #WHITSKITCH – I’D LOVE TO SEE!

1. In Black and White Melbourne, Victoria, Australia About Podcast From alleyway gangsters to cold war spies to eccentric entrepreneurs,

14 Day Slay – NEW At-Home HIIT Program With Tone It Up!

The BEST Foods To Eat For Intermittent Fasting

Intermittent fasting has been front and center among the diets that work for women over 50. It’s even the cornerstone

The Many, MANY Benefits of Cherry Juice

These Are The Most Popular Diets In 2020

November 27, 2020 Rachel Murphy 0
We use cookies to ensure that we give you the best experience on our website. If you continue to use this site we will assume that you are happy with it.OkNoPrivacy policy
You can revoke your consent any time using the Revoke consent button.Revoke consent